There is no doubt that Ramadhan is physically demanding. During 30 days, believers are requested to abstain from dawn until sunset from food, water, smoke, sex, anger and cursing. However, God is Merciful and this is why the Qu’ran has special injunctions for those physically susceptible such as children, women on their menses, pregnant women, the old, the ill and the travelers.

In previous years, my preparation for this holy month included meal planning, purchasing kitchen appliances (God bless the slow cooker) and reducing my daily food and water intake. My stomach, not my soul, always felt ready to take on the fast. My hopes? To be prepared physically allowing the spiritual to overtake me.

Unfortunately, I did not manage to detach myself from my rigid food plan and the spirituality took a toll. As I felt myself becoming increasingly detached from God during the process which had originally revealed to me His Glory, I felt engulfed by an overwhelming loneliness. This loneliness was only compounded when facing the reality of my status as a convert (the only Muslim of my family) and my location (a small-town whose Muslim community members all are married with young families except myself).

By the Grace of God, my situation has greatly improved this (gregorian calendar) year and I find myself back in Ottawa. I am now surrounded by other non-married childless Muslim converts and I am excited to attend a wide number of organized events. However, this is not the whole of my Ramadhan plans.

Here are my, prehaps ambitious, plans for Ramadhan 2015 and what I have prepared to help me accomplish my goals:

Many Muslims believe that, through Qu’ran verses and Prophet Mohammad’s example (hadith),  ritual prayer (salaat) is obligatory 5 times per day. While I do not hold this as a mandatory belief to a valid Muslim identity, I find myself compelled by ritual prayer and wish to introduce into my life what many deem as the 2nd pillar of Islam:

To prepare to complete appropriately the 5 daily prayer, I have been studying Islamic jurisprudence (fiqh) and have invested in the extended version of the iphone app Muslim Pro 7.0 (also available on Android, Blackberry, and Windows phones)

Memorizing New Chapters of the Qu’ran

As an adult, a convert and a non-arabophone, my ability to learn and memorize chapters (surat) of the Qu’ran is limited. As someone who also values knowledge, I want to learn both the Arabic pronunciation and it’s meaning in translation.

When I first learnt the basis of ritual prayer (salaat), I learned the first chapter of the Qu’ran (named Al-Fatiha or “The Opening”) and chapter 112 (Al-Ikhlaas or “Absoluteness”) through a beginner prayer guide. To facilitate the visual memorization, I created visually-appealing art with qu’ranic verses. I hope to have these both at my work and at home as reminders.

Introducing More Voluntary Prayer In and Out of Ritual Prayer

I spoke earlier about ritual prayer (salaat) and its commonly-held obligatory times (Fajr, Dhur, Asr, Maghrib and Isha). However, while there are some agreed upon recitations, different sects and school of thoughts (madhab) include within obligatory prayers a number of recommended volutary recitations. Moreover, outside of obligatory ritual prayers, there are also extra voluntary ritual prayers (salaat ul-fard) and suggested informal prayers (du’a) for various times of day and situations.

These sects and school of thoughts have collected, mostly from the examples of Prophet Mohammed (hadith), extensive jurisprudence. While I do not endorse sectarianism and do not hold any sect above another, the nearest mosque being “Sunni”, I have been studying its jurisprudence material for my application this Ramadhan.

I began by taking countless notes both in my jurisprudence books and from websites, articles, pamphlet and coutnless other resources. However, when I thought about putting this into practice during Ramadhan, starved, thirsty and sleep-deprived, I thought it would be best to make myself an easy reminder. A pamphlet format seemed the most appealing as I could simply fold and take along with me to work, to the mosque, to friends or events. 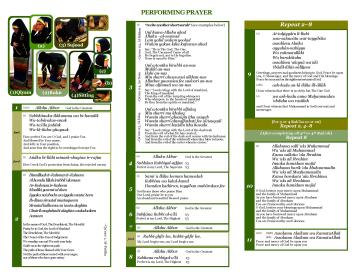 In traditional Islam, there is a voluntary Night prayer called Qîyam ul-Layl (or “Standing in the Night”), where at any time during the year, believers are encouraged to pray before falling asleep or if they wake in the middle of the night, to read or recite from memory long chapters (Surat) from the Qu’ran (“Qîyam” or Standing is the position in which a believer recites from the Qu’ran during prayer).

Each night, mosques everywhere hold congregational Qîyam ul-Layl Ramadhan prayers known a Taraweeh. While it varies from one congretation to another, I have created another pamphlet with some of the general rules of Qîyam ul-Layl and du’as for Ramadhan.: 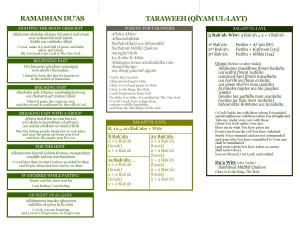 Reading the Qu’ran in the Order of Revelation

During Ramadhan, Muslims are encouraged to read the entire Qu’ran which has been divided in 30 juz (or parts) for the 30 days of the month of Ramadhan. During Taraweeh, congregations are lead through the recitation of one part of the Qu’ran per night. However, believers are welcomed to read or recite from the Qu’ran if they have not memorized the entire Qu’ran.

Since this has been a goal of mine for a while, I will attempt, this Ramadhan, to read the entire Qu’ran in order of revelation. I took much time reading and dividing the entire Qu’ran, in order of revelation, in 30 parts and will be reciting from my own Qu’ran each night during Taraweeh. While this is not the traditional way of reading the Qu’ran, I thought this may bring me a new understanding of the revelations. This list of parts (juz) and chapters (surat) will be at the back of my Ramdhan pamphlet:

May you have a blessed month of Ramadhan and may your fast and prayers be accepted.

8 thoughts on “My Ramadhan Prep Doesn’t Include Food Training”